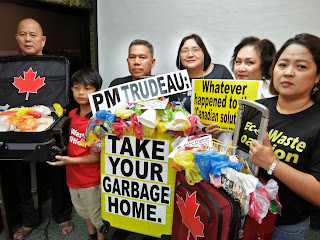 The EcoWaste Coalition welcomed the pronouncement made by Prime Minister Justin Trudeau at his press conference yesterday indicating that the festering garbage shipments from Canada could be repatriated to its origin.

“We welcome the fact that he discussed this drawn out dumping controversy with President Rodrigo Duterte and committed to follow up on the matter.  Like many of our colleagues, we are cautiously optimistic that Canada will be able to take their garbage back, but they should do it with greater urgency, and commit to making sure such unethical and unlawful dumping never happen again in the future,” said Aileen Lucero, National Coordinator, EcoWaste Coalition.

“The EcoWaste Coalition, together with our partners in the environmental justice movement in the Philippines and in Canada, will remain alert and not let our guard down knowing that the re-export of the trash shipments is only a theoretical possibility at this time,” she said.

Zero Waste Canada, a non-profit grassroots organization dedicated to helping end the age of wasting through better design and education, recently emailed the EcoWaste Coalition affirming their “support in this much too long ordeal,” saying “we will continue to shine a light on this until it is resolved.”

Trudeau yesterday told the press “it is now theoretically possible to take it back,” adding the legal obstacles have been addressed.

"Canadian legal regulations prevented us from being able to receive the waste back to Canada. We had legal barriers and restrictions that prevented us from taking it back, but that's done now," he said, noting “there’s still a number of questions around who would pay for it.”

“Compared to the vague statement he made in 2015 on the sidelines of the APEC Summit, what Trudeau said this time offers a glimmer of hope for a country like ours that is struggling with our own garbage woes,” Lucero observed.

Trudeau disappointed environmentalists when he vaguely stated in 2015 that a “Canadian solution” is being developed, but made no firm declaration of re-importing his country’s garbage.

“We trust the Canadian government will be able to quickly address the remaining financial and legal questions, so as not to delay the shipping of the overstaying trash back to Canada.  We have waited for so long and we want to put this controversy behind us,” said Sonia Mendoza, Chairman, Mother Earth Foundation.

For her part, Abigail Aguilar, Campaigner, Greenpeace Southeast Asia, said:  “While we appreciate the soundbyte, we hope that this pronouncement does not remain a ‘theory’ but a ‘fulfilled promise.’ The Canadian waste issue has long been swept under the rug. This stinking problem needs to be resolved as soon as possible and we hope that it does not wait for another two years, another APEC or ASEAN Summit for it to happen."

It will be recalled that a total of 103 shipping containers of mixed household garbage declared as scrap plastics for recycling arrived in the Philippines from Canada in 2013-2014.

Customs inspectors intercepted the garbage shipments by Chronic Inc. (a Canadian company) to Chronic Plastics (a Filipino company) after being alerted by the Environmental Management Bureau about the misdeclared trash imports.

Importer Adelfa Eduardo and customs broker Sherjun Saldon were subsequently charged in court for violation of Republic Act 6969 (Toxic Substances and Hazardous and Nuclear Wastes Control Act of 1990) and tariff and customs laws.

A waste analysis and characterization study conducted by the Department of Environment and Natural Resources (DENR) in 2014 showed that 64% of the shipments were “bailed municipal solid waste or garbage destined for immediate local disposal and cannot be recycled.”

Such garbage shipments, according to the DENR, “are strictly prohibited to be exported and are classified as Waste No. Y46 listed in Annex II of the Basel Convention on the Control of Transboundary Movement of Hazardous Wastes and Their Disposal.”

Twenty-six of the 103 container vans of Canadian garbage were illegally disposed of at a private landfill in Tarlac in June–July 2015, angering local officials and residents and galvanizing citizens’ opposition against foreign waste disposal in the country.

In June 2016, Judge Tita Bughao-Alisuag of the Regional Trial Court of Manila (Branch 1) ordered the return of the 50 shipping containers covered by Criminal Case No. 143-11191, emphasizing that the Philippines is not a “trash bin” and that the dumping incident “should not be made a precedent for other countries to follow.”  The court order has yet to be complied with. 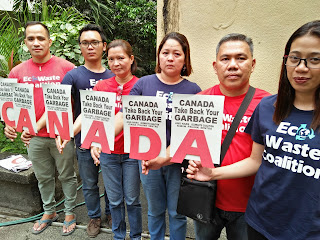