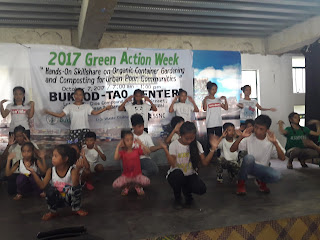 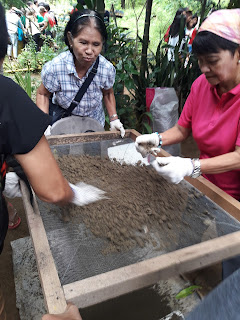 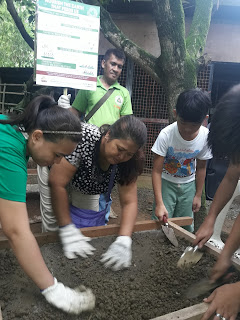 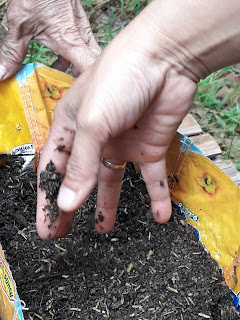 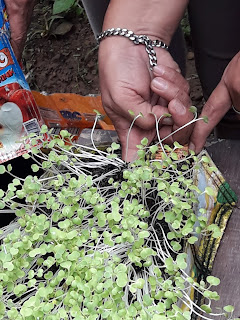 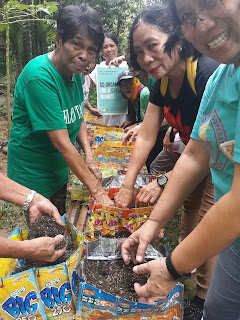 Over 150 urban poor residents from Camarin,  literally got their hands dirty today for a solution-focused event to combat malnutrition and pollution.

To mark the Green Action Week (GAW) on October 2 to 8, the EcoWaste Coalition in collaboration with Buklod Tao and the Urban Poor Associates (UPA) organized a hands-on skillshare in San Mateo, Rizal on how to raise organic vegetables through container gardening and how to turn biodegradable discards into compost.

GAW is a global campaign promoting sustainable consumption initiated by the Swedish Society for Nature Conservation, ’s oldest and largest environmental organization and a partner of the EcoWaste Coalition.

“We have gathered today for a face-to-face learning with Buklod Tao community leaders on organic farming and composting that can help urban poor families improve nutritional intake as well as prevent trash from stinking,” said Thony Dizon, Coordinator of the EcoWaste Coalition’s Project Protect.

Dizon cited government data indicating high chronic malnutrition rate at over 25% in 2015 among children from age 0 to 2 that is aggravated by the unchecked consumption of foods high in trans fat, sugar and salt.

“The lack of physical space should not discourage urban poor households from organically growing basic vegetables using repurposed containers such as juice packs, tin cans and plastic bottles, which can be placed in front of a house, by the rooftop or arranged as hanging planters,” he said.

“Venturing into organic food gardening will also encourage our households to segregate their discards at source and turn fruit and vegetable peelings and other biodegradables into compost,” added Noli Abinales, adviser, Buklod Tao, a people’s organization advocating for an environmentally-responsible and climate-resilient community.

“Composting is a key solution to the poor waste management in many communities, which can lead to a host of environmental and health problems such as the spread of diseases, flooding and global warming,” he said.

Abinales noted that Metro Manila generates 9,499 tons of waste per day consisting of biodegradable (44.32%), recyclable (31.64%), residuals (23.68) and special (0.36%) wastes as per waste characterization and analysis by the Metro Manila Development Authority.

UPA community leader Luz Sudueste from  expressed her hope that similar skillshares will  be held in all urban poor communities with support from national and local authorities and civil society groups.

“Organic food gardening and composting is beneficial for our families and our environment.  We hope that similar trainings will be conducted in urban poor communities nationwide to help address the people’s need for nutritious food and for better waste management and sanitation,” she said.

The participants brought home with them vegetable saplings planted on compost-enriched soil in a recycled pot container made out of juice packs courtesy of Buklod Tao.

Go organic for a greener planet!

Does it matter if it´s organic or not? The short answer is yes, it does. It makes a difference for you, your children, the bees, the farmers, the trees and the rivers. It makes an important difference to our planet. Organic food and farming for all is the Green Action Week theme for 2013-2017.
5 reasons to choose organic food


Organic farming does not use agrochemicals like pesticides as these can be harmful for the environment and human health. Pesticides pose a risk to the health of farming families and people working on farms, who are directly exposed. But also to those living nearby who may be exposed to spray drift, polluted water, soil or waste from the farms. Research shows that eating organic food reduces exposure to hazardous pesticides.


Biodiversity is essential to make nature work. Did you know that the threat to biodiversity is as acute as the climate threat? Organic farmers plant a wide variety of crops rather than just one big field of the same. This and other organic methods increase the range of species of natural plants, birds, animals and insects in the soil and around the farm.


3. Knowledge instead of chemicals!


We need to change the way we produce and consume food. Studies show that solutions for the future can be found in organic agriculture. Instead of using agrochemicals organic farmers use knowledge. They use a greater diversity of crops and varieties – often indigenous. This generally gives better protection against drought and diseases, thus reducing risks for the farmer. In many parts of the world, the production methods used also increase the yields.


Organic farming is often more diversified and creates more jobs. Often, the production costs for the farmers are lower and profits higher when they no longer have to buy chemical fertilizers, pesticides and seeds.


Over 70% of the world’s poor live in rural areas and most of them are involved in farming. The majority of these small scale farmers already grow organic or close to. Buying organic products leads to increased production and incomes, improved local food security and a cleaner and greener environment.