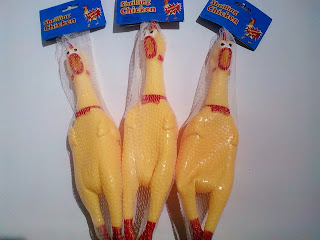 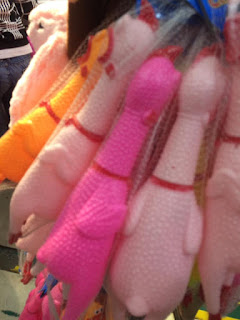 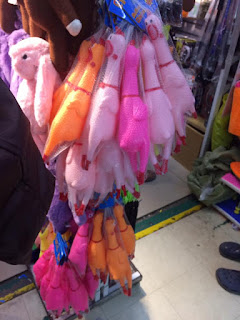 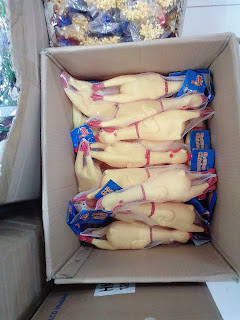 Consumers should refrain from buying a cheap plastic chicken toy that makes a screaming sound when squeezed due to its toxic content.


The EcoWaste Coalition, a non-profit watch group on hazardous substances on products and wastes, revealed that the “Shrilling Chicken” toy sold in Divisoria, a popular hub for bargain hunters, may expose children to harmful chemicals.

“This squeaky toy, which can be funny and entertaining, contains undisclosed plastic additives that may put kids at risk from exposure to health-damaging chemicals,” said Thony Dizon, Coordinator, EcoWaste Coalition’s Project Protect.

“Sold without the obligatory market authorization from the health authorities, this toy will not pass the quality and safety requirements due to its phthalate content above the regulatory limit,” he added.

Dizon cited the results of laboratory tests commissioned by the group indicating the presence of phthalates DEHP and DBP up to 19 percent and 13 percent, respectively, exceeding the government’s maximum allowable limit of 0.1 percent by weight.

Phthalates, which are added to make polyvinyl chloride (PVC) plastic flexible and soft, are endocrine disrupting chemicals linked to various health problems, including genital abnormalities in boys such as malformed penises and undescended testicles, and the early onset of puberty for girls.

“Sold for P35 to P45 a piece, this contraband toy does not provide any information regarding its manufacturer, importer or distributor aside from the usual ‘made in ’ tag,” he added.

To avoid chemical risk, European countries have rejected the imported Shrilling Chicken from at the border, banned its marketing or ordered its withdrawal from the market.


, specifically banned the toy for containing another highly toxic substance known as short chain chlorinated paraffins (SCPPs).  Last week, the Stockholm Convention added SCPPs in the treaty list of Persistent Organic Pollutants (POPs) and banned its use in toys and children’s products.

Phthalate DEHP and SCPPs are “possibly carcinogenic to humans” according to the International Agency for Research on Cancer.

To avoid being exposed to these chemicals, the EcoWaste Coalition advised parents who have purchased “Shrilling Chicken” to keep the toy out of children’s reach or to dispose of it as hazardous waste.

The group also appealed to retailers not to sell their remaining stocks of this unregistered toy and to return it to their source for proper disposal.

The EcoWaste Coalition further urged the Department of Health to enforce its own directive banning specific phthalates in toys.

As per DOH. A.O. 2009-005 as amended in 2011, “it shall be unlawful for any person to manufacture for sale, offer for sale, distribute in commerce, or import into the country any children’s toys that contain concentrations of more than 0.1 percent by weight of di-(2-ethylhexyl) phthalate (DEHP), dibutyl phthalate (DBP), or benzyl butyl phthalate (BBP).”