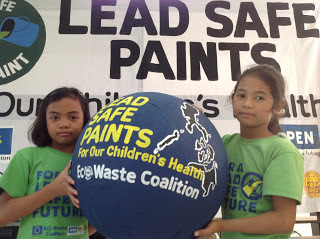 The group further revealed that some companies have stopped or are on the verge of fully removing lead in paints used for industrial applications ahead of the deadline on December 31, 2019.

“We give our compliant paint manufacturers two thumbs up for meeting the phase-out requirements for lead in ADH paints as provided by law.  This is good news, especially for our children who are most vulnerable to the toxic effects of lead exposure,” remarked Aileen Lucero, National Coordinator, EcoWaste Coalition.

“We credit the Department of Environment and Natural Resources – Environmental Management Bureau (DENR-EMB) and the Philippine Association of Paint Manufacturers (PAPM), as well as our paint chemists and their bosses and our untiring advocates for lead-safe children’s environment for this shared achievement,” she said.

“We also recognize the role of the Global Alliance to Eliminate Lead Paint (GAELP) in promoting the international target of phasing out lead-containing paints to prevent and reduce children’s and workers’ exposure to lead,” she added.

“The overwhelming response of the country’s paint makers provides a good barometer of the enforceability of the prohibition on lead-added paints and the readiness of the industry to innovate and comply,” she further said.

Pacific Paint (Boysen) Philippines, Inc. and Davies Paints Philippines, Inc. were ahead of the pack, phasing out lead-based raw materials in their paint production even before the issuance of DENR Administrative Order 2013-24, also known as the Chemical Control Order for Lead and Lead Compounds.

As per the responses received by the EcoWaste Coalition to its latest outreach to the country's paint makers, 19 other companies have shifted to non-lead raw materials for ADH paints, which are used for painting interior or exterior walls and surfaces of homes and schools, and for decorating furniture and even children’s products such as cribs and toys.

Lead in paint studies conducted in 2008, 2010, 2013 and 2015 by the EcoWaste Coalition in collaboration with IPEN, a global civil society organization promoting safe chemicals policies and practices, revealed that the vast majority of oil-based ADH paints sold locally had lead concentrations above 90 parts per million (ppm), the maximum allowable limit for lead in paint under the DENR A.O. 2013-24.

The EcoWaste Coalition will again undertake a lead in paint study this year to determine the reduction in lead-containing ADH paints sold in the market following the three-year phase-out period.

According to GAELP, “children can be severely affected by eating lead-based paint chips, chewing on objects, including toys painted with lead-based paint, or from exposure to dust or soil that contains lead from paint.”

“At high levels of acute exposure, lead attacks the brain and central nervous system to cause coma, convulsions and even death,” the World Health Organization (WHO) said.

“At lower levels of exposure that cause no obvious symptoms and that previously were considered safe, lead is now known to produce a spectrum of injury that causes loss of cognition, shortening of attention span, alteration of behavior, dyslexia, attention deficit disorder, hypertension, renal impairment, immunotoxicity and toxicity to the reproductive organs,” it said.

“There is no known level of lead exposure that is considered safe,” the WHO has repeatedly warned.