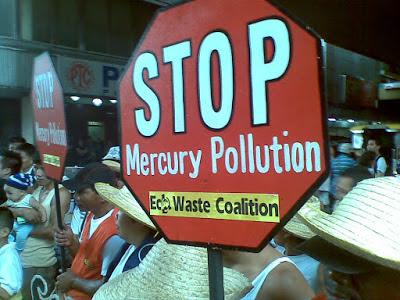 The EcoWaste Coalition today reiterated its appeal for the immediate ratification of a global treaty that seeks to address worldwide emissions and releases of mercury that threaten the ecosystems and the health of millions.

Through letters sent today to various governmental officials,  the non-profit watch group for chemical safety and zero waste restated the need for concerned agencies to issue their Certificates of Concurrence supporting the ratification by President Rodrigo Roa Duterte of the Minamata Convention on Mercury.   The said certificates are to be sent through the Department of Environment and Natural Resources (DENR), the lead agency for this matter,

The treaty, which the Aquino administration signed in 2010, is named after the place where thousands of people were poisoned by mercury-tainted industrial wastewater in the mid-20th century in Japan, leading to crippling symptoms that became known as the Minamata disease.

Key highlights of the treaty include a ban on new mercury mines, the phase-out of existing ones, the phase out and phase down of mercury use in a number of products and processes, control measures on emissions to air and on releases to land and water, and the regulation of the informal sector of artisanal and small-scale gold mining.

“We owe it to the people of the Philippines and to the people of Minamata, the Japanese city after whom the treaty was named, to ensure that the Convention enters into force and is effectively implemented to prevent and reduce mercury pollution worldwide,” wrote Eileen B. Sison, President, EcoWaste Coalition.

The letters were sent via e-mail to the Secretaries of the Departments of Energy, Science and Technology, and Trade and Industry, as well as to the Directors of the Fertilizer and Pesticide and Occupational Safety and Health Center.

The incumbent heads of the Department of Health and the Bureau of Customs had already issued their respective letters concurring with the ratification of the mercury treaty.

In pushing for the treaty ratification, the EcoWaste Coalition cited the Ratification Dossier prepared by the DENR with assistance from the Swiss Confederation and the United Nations Institute for Training and Research, which states that: “the existing policies, programs and regulations have, to some degree, prepared the Philippines in terms of fulfilling the requirements of the Convention.”

As pointed out in the Ratification Dossier, “despite the economic cost to comply with the provisions of the Convention, the long-term benefits of becoming a Party far outweigh the disadvantages.”

It further emphasized that “the Convention is consistent with the country’s basic policy to protect and preserve the right to health of Filipinos, and the right of the people to a balanced and healthful ecology.”

The First Conference of the Parties to the Minamata Convention on Mercury is planned to take place in the week of 25 September 2017 in Geneva, Switzerland subject to entry into force of the Convention prior to this date.

To date, 37 governments have ratified the Convention, which will enter into force on the ninetieth day after the date of deposit of the fiftieth instrument of ratification, acceptance, approval or accession.