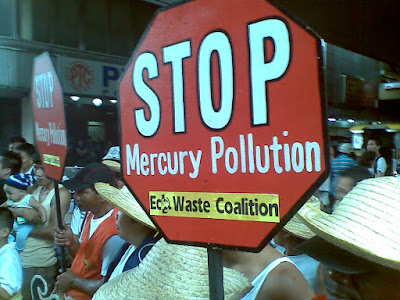 With a new presidency looming in the horizon, a watch group on toxic chemicals and wastes exhorted whoever will win the coveted post to ensure the immediate ratification of the Minamata Convention on Mercury.

“The mercury treaty has not yet come into force more than two years since it was signed in October 2013 by most governments, including the Philippines,” said Aileen Lucero, Coordinator, EcoWaste Coalition.

“As it looks improbable that the treaty will be ratified during the remaining days of the Aquino administration, we turn our hope to the new presidency for it to happen,” she said.

“Having named the Convention after Minamata, the Japanese city that suffered heavily from industry-caused mercury pollution for decades, imposes a moral responsibility for all the world’s leaders to rally behind the treaty ratification for it to come into force,” she emphasized.

“We specifically call upon our government to honor Minamata by ratifying and implementing the treaty,” she said.


The early ratification and implementation of the Minamata Convention will help cut mercury pollution across the globe by providing for controls and reductions in products, processes and industries where mercury is used, released or emitted, the EcoWaste Coalition commented.

It will bolster the country’s efforts to prevent and reduce mercury pollution, which, among other things, include the phasing out mercury in medical devices, banning mercury in skin whitening cosmetics and prohibiting mercury in mineral processing, particularly in artisanal and small-scale gold mining, the group added.

At their General Assembly last Friday, members of the EcoWaste Coalition resolved to call upon the next president to make the treaty ratification a top priority during her/his first 100 days in office.

“The new chief executive will certainly have her/his hands full organizing the new government and we hope that she/he will not put the treaty ratification on the back burner,” Lucero said.

The swift ratification of the mercury treaty by the Philippines will be crucial in meeting the required 50 ratifications for the treaty to come into force this year, the EcoWaste Coalition said.

The EcoWaste Coalition wanted the Philippines to join the first 50 countries to ratify the mercury treaty as this will “bring honor to our country and people, as well as strengthen on-going work to prevent and reduce emissions and releases of toxic mercury into the air, land and water to protect human health and the environment.”

“The treaty ratification can be the most important act of the new government in the first 100 days that will have lasting positive effects locally and globally on human health and the environment,” the group said.

Department of Environment and Natural Resources (DENR) Secretary Ramon J.P. Paje signed the mercury treaty on behalf of the Philippines at a diplomatic conference held in Japan in 2013.

With assistance from the United Nations Training and Research (UNITAR), the DENR Environmental Management Bureau (EMB) led by Assistant Secretary Juan Miguel Cuna has prepared the draft "Ratification Dossier," which, among other things, includes the certificates of concurrence from concerned agencies.

While other agencies have already concurred, the Department of Energy and the Bureau of Customs have yet to inform the DENR - EMB of their concurrence.

After being reviewed and agreed to by the various agencies, the executive branch will transmit and endorse to the Senate the "Instrument of Ratification" and the text of the ratified treaty for concurrence by two-thirds of all the Senate members.

Signed by 128 governments, the treaty will  enter into force 90 days after 50 nations have ratified it.