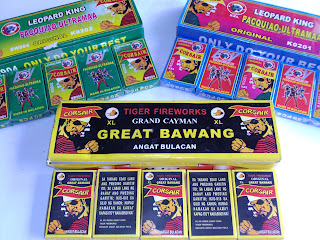 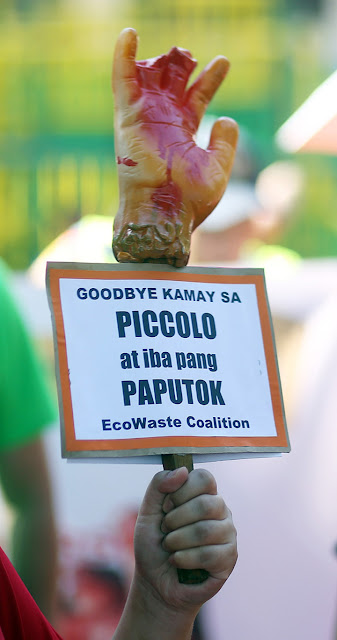 The EcoWaste Coalition, a civil society partner of the Department of Health (DOH) in its yearly “Iwas Paputok” campaign, urged the government to declare an all-out war against the banned piccolo firecracker, the top cause of firecracker-related injuries in the country.

While zeroing in on piccolo, the group also expressed support for a national ban on all firecrackers to curb the senseless injuries and sufferings inflicted on firecracker igniters as well as spectators.

“An all-out war against smugglers, distributors and sellers of piccolo will stop this small but terrible monster in further harming more child victims,” said Aileen Lucero, Coordinator, EcoWaste Coalition, which had earlier tagged piccolo as “children’s enemy number one” during the festive season.

“We urge the government to declare such crackdown now, not wait until December 2016, and assign the Bureau of Customs to accomplish this task before the next Christmas season,” she emphasized.

“As what is at stake is the health and safety of young children, we urge the government to provide for a reward system that will lead to the identification and apprehension of culprits involved in the illegal trade of piccolo and other banned firecrackers,” she emphasized.

As of January 1, the DOH had documented a total of 380 cases of firecracker-related injuries, out of which 219 were piccolo victims.

To prevent and reduce injuries, as well as the generation of hazardous fumes and wastes, the EcoWaste Coalition also called for a total ban on firecrackers as expressed by officials of the DOH,  Department of Environment and Natural Resources, Philippine National Police and the Bureau of Fire Protection.

“We urge our lawmakers to enact a total ban on firecrackers to stop this out-of-date practice of ushering in the New Year with bloodied hands, smoggy atmosphere and garbage-strewn surroundings,”  Lucero added.

“In the name of safer revelry, cleaner air and waste-free environment, we ask our lawmakers to act now and end this mindless violence against humans, animals and Mother Earth,” she concluded.

The total ban on firecrackers will be in favor of the constitutionally-protected rights of the people to health and to a balanced and healthful ecology that the country's major environmental laws such as the Clean Air Act, Clean Water Act and the Ecological Solid Waste Management Act seek to uphold, the group said.

Recognizing that it might take a longer time to enact a national law, the EcoWaste Coalition turned to local government officials to pass strong city or municipal ordinances banning firecrackers.