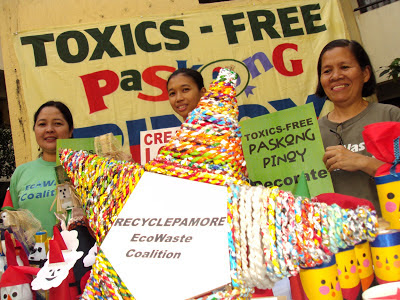 With Christmas just around the corner, a zero waste advocate urged the general public to reduce, reuse and recycle holiday discards as a token of our appreciation for Mother Earth.
“Let us play Santa Claus to Mother Earth by keeping our holiday consumption within bounds and by cutting back on what we dispose of and recycling even more,” said environmentalist Sonia Mendoza who heads the EcoWaste Coalition and the Mother Earth Foundation.

“Excessive consumption puts tremendous pressure on nature where resources are obtained to create products for our needs and wants, which often leads to degraded and polluted ecosystems,” she lamented.

“The festive holiday season is when the throw-away mindset is at its worst as can be seen from the overflowing household bins and dump trucks and the countless garbage heaps dotting the streets,” she noted.

“If you rummage through the bins, you will easily find the most discarded items during this time of the year such as packaging for toys, gift boxes and wrappers, shopping bags, disposable food containers and, yes, lots of food waste,” she added.

During the extended yuletide celebration, the per capita daily waste production of 0.7 kilo in Metro Manila rises to 1.2 kilo due to the shopping and party craze and the boisterous New Year’s revelry marked by the blasting of firecrackers and fireworks.

To cut back on the generation of what the EcoWaste Coalition refers to  “holitrash” (short for holiday trash), Mendoza encouraged the public to put the 3Rs (reduce, reuse, recycle) at the heart of the festivity.

For example, holiday shoppers are advised to bring a stash of reusable bags and containers when going to the mall or market and shun both paper and plastic bags to reduce bag waste.  Consumers are also reminded to bring along a shopping list to avoid impulsive buying and unnecessary spending.

Instead of new gift wrappers, givers can opt not to wrap Christmas presents at all or, if wrapping is desired, reuse old bandannas, handkerchiefs, fabric remnants, jars, shoe boxes, newspapers and magazines instead.  Bags, boxes and wrappers of gifts received should be neatly kept for reuse next gift-giving and not simply thrown to the dumps.

As waste is created by mixing discarded materials, the EcoWaste Coalition urged all waste generators from households to restaurants to keep discards separated in line with Republic Act 9003, or the Ecological Solid Waste Management Act.

The group also stressed the importance of not burning discards, which can lead to the creation and discharge of health-damaging pollutants as well as greenhouse gases that cause global warming and climate change.
Open burning and open dumping, the group reminded, are among the prohibited acts under R.A. 9003.

“By playing Santa Claus to Mother Earth, we can significantly lessen the volume and toxicity of ‘holitrash’ and protect the public health and the environment,” Mendoza said.