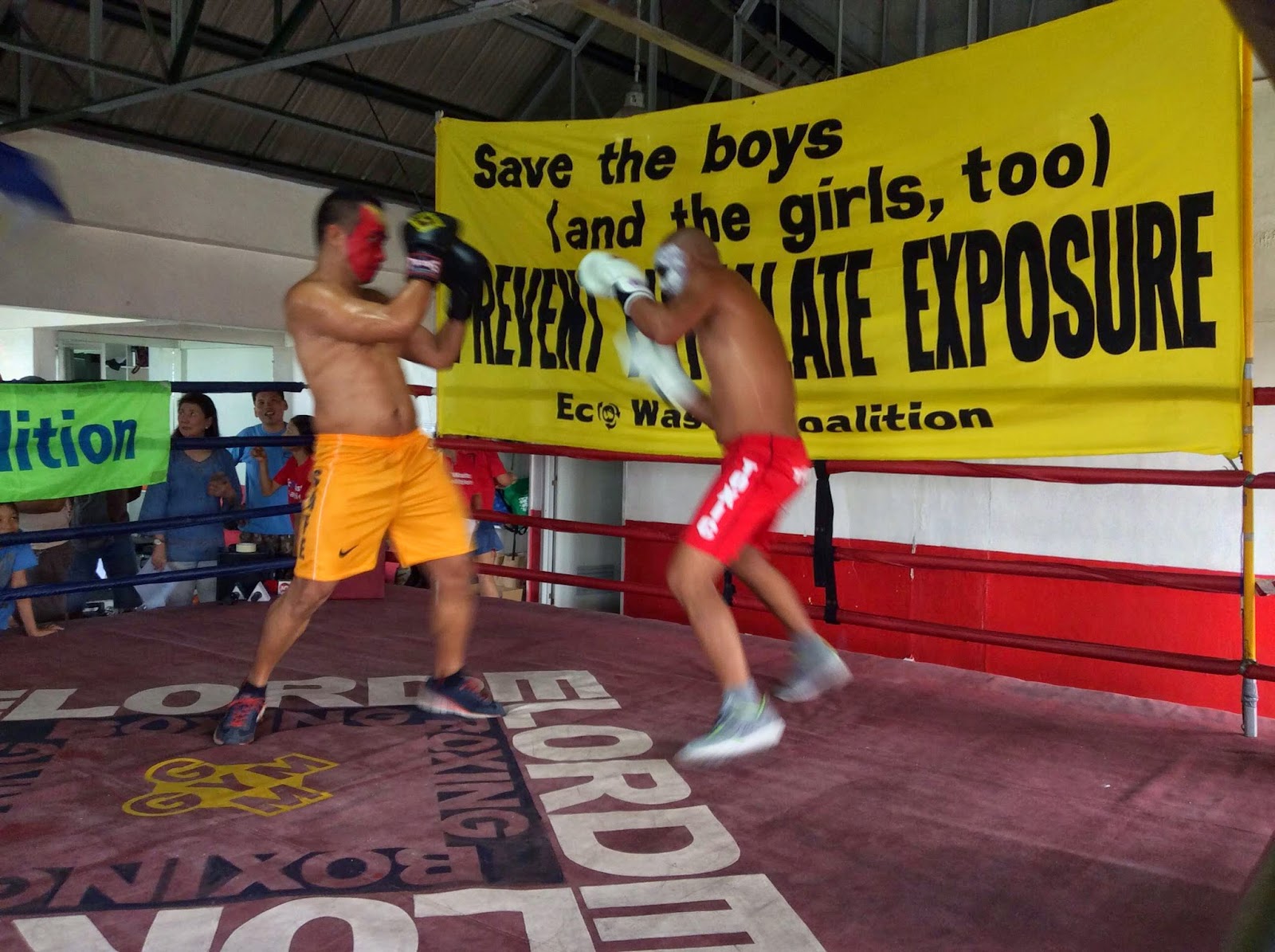 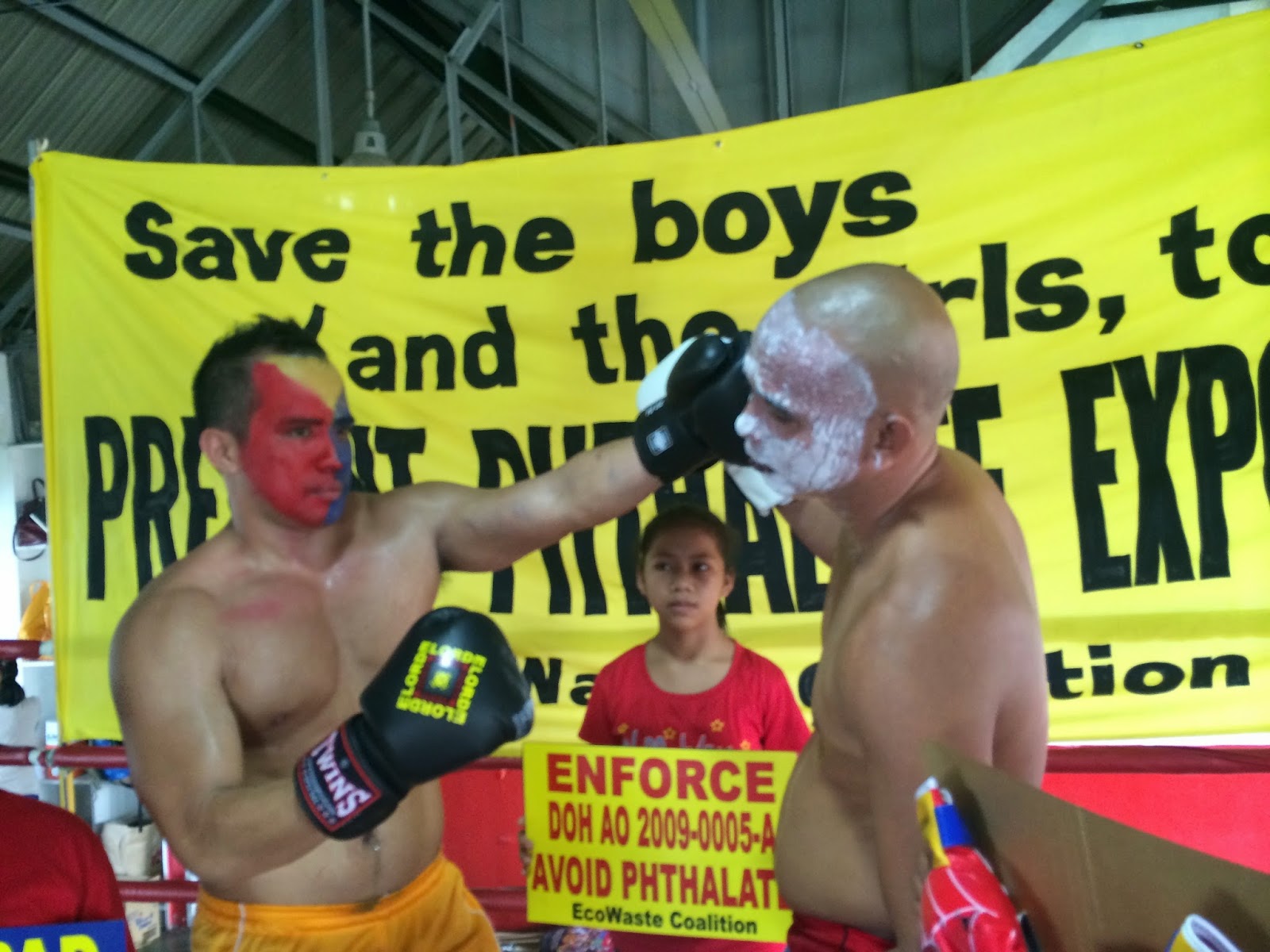 Taking advantage of the fast approaching Pacquiao – Mayweather “fight of the century,” the EcoWaste Coalition today hosted a boxing match to call attention to chemical plasticizers that are particularly notorious for damaging men’s health.

The bout took place at the Elorde Boxing Gym in Lagro, Novaliches, Quezon City with a yellow banner that says “Save the Boys (and the Girls, too): Prevent Phthalate Exposure” as backdrop, and featured boxers “Totoy Kamao” (the good guy) and “Nonoy Peligro" (the bad guy).

“Through this event, we hope to emphasize the need for awareness and action to  reduce human exposure to phthalates,” said Thony Dizon, Coordinator of the EcoWaste Coalition’s Project Protect, who also acted as referee for the match.

Phthalates (pronounced as THAL-ates) are a class of chemical compounds used to make polyvinyl chloride (PVC) plastic pliable and softer.

“Knowing how we Filipinos, especially the males, love this sport, we thought that the boxing ring provides a good stage to attract attention to these chemical compounds and their adverse impacts to men’s health,” he added.

Phthalates are known to cause reproductive and sexual developmental disorders such as malformed penises, undescended testicles and other genital deformities, as well as cause damage to the kidneys, liver and lungs.

Humans get exposed to phthalates through eating, breathing and skin contact.  Young children take in higher doses of phthalates due to their habit of biting or chewing PVC toys, or through their common hand-to-mouth behavior.

During the match, “Nonoy Peligro” exchanged blows with “Totoy Kamao” hitting the latter many times to illustrate how the human body is exposed to phthalates, a ubiquitous ingredient in many products such as toys, cosmetics and personal care items, medical devices, home improvement products and packaging materials.

To underscore the male problem with phthalates, EcoWaste staff held round cards every round with some of the adverse effects of phthalate exposure written on the card.  For example, round 1 (deformed penis), round 2 (undescended testicles), round 3 (infertility).

But like Manny Pacquiao, the legendary Filipino boxing icon, “Totoy Kamao” fought hard, stood his ground and, in the end, won the bout with flurry of combination punches.

At the end of the match, “Totoy Kamao” held a placard that says “Enforce DOH A.O. 2009-0005-A,” the Department of Health-issued Administrative Order regulating and restricting phthalates in children’s toys.

Dizon explained that phthalate exposure can be prevented, starting with the enforcement of the said DOH regulation.

Last Sunday, the EcoWaste Coalition cautioned consumers against buying kiddie boxing gloves that could be laden with phthalate DEHP, a probable cancer-causing substance in humans according to the US Environmental Protection Authonity.


The group’s warning was based on the laboratory tests that detected DEHP in two kiddie boxing gloves at 3.16% and 9.05%, way above the 0.1% regulatory limit.