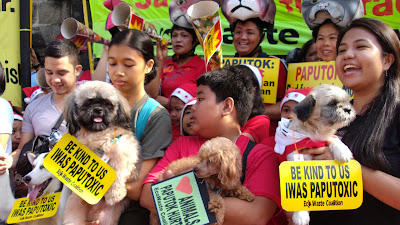 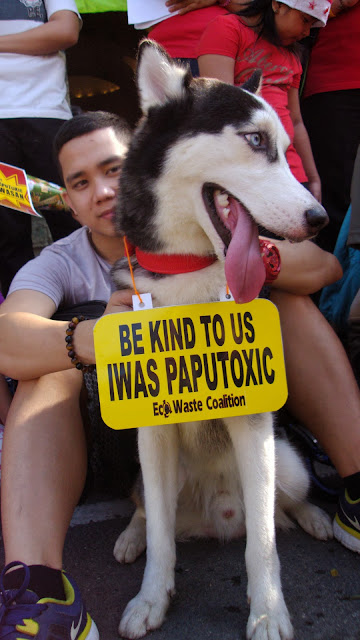 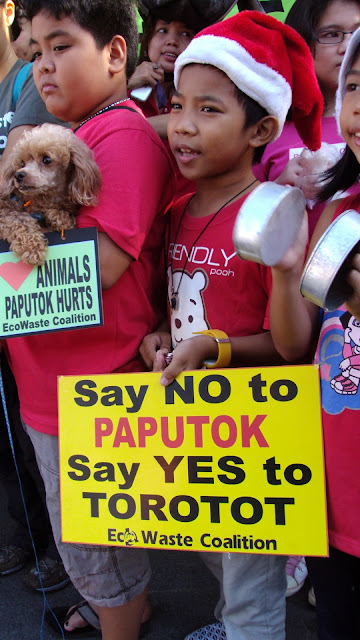 Environmental, church and animal welfare advocates today assembled together with their pets in front of Malate Catholic Church to call on Filipinos to shun firecrackers and fireworks during the New Year revelries.

The EcoWaste Coalition and the Our Lady of Remedies Parish co-organized a friendly, furry and featherly gathering of humans and pets centered on the theme, “Love Animals, Paputok Hurts,” as part of the groups’ “Iwas PapuToxic” campaign.

They were joined by animal welfare groups such as the Animal Kingdom Foundation (AKF), Compassion and Responsibility for Animals (CARA Welfare Philippines), Dog Breeds and Breeders, Philippine Animal Lovers and WeDogs.

To draw public attention on the traumatic ordeal that animals have to endure amidst ear-splitting explosion to ring in the New Year, the cheerful advocates  donned animal-like headgears as they paraded with their pets from the church to the nearby Plaza Rajah Sulayman
along Roxas Boulevard.

“Our traditional New Year festivities have become unbearably loud for humans and animals alike, but since many animal species have highly sensitive ears, this deafening mayhem becomes an annual rite that tortures them,” lamented Aileen Lucero, National Coordinator of the EcoWaste Coalition.

“As caretakers of nature, we are bound by a common duty not to harm other creatures that inhabit the earth, so please do not make animals suffer from the superfluous blasting of firecrackers and fireworks to herald the New Year,” said Rev. Father Michael "Mickey" Martin of the Our Lady of Remedies Parish who later officiated a special blessing of the gathered animals.

“Cats, dogs, birds and other small animals exposed to the bursting of firecrackers are easily frightened and can suffer from an irreversible hearing impairment, eye damage, and in some cases, heart problems,” said Atty. Heidi Caguioa of AKF.

“Aside from harming their highly sensitive ears, the explosive and random booms, the pungent fumes, and the bright displays of light also hurt the animals’ powerful noses and keen eyesight,” she added.

In addition, the fear and panic caused by firecracker noise can severely stress animals resulting to stomach upset, loss of appetite, and to some extent, decreased sense of direction that can result to animals getting lost or injured, the groups said.

The groups recommended the following tips to help animals survive the firecracker noise and injuries during the New Year’s Eve celebrations:

1. Persuade members of your household to make your home a “no firecracker” zone.

5. Manage the environment so it is as relaxing as possible and as less stressful as you can make it.

6. Provide your pets with a safe place to take temporary refuge. If possible, allow them to stay in a quiet room such as a bedroom.

7. Close the windows, put the curtains down and play a relaxing music to neutralize the noise  from the outside to help your pets feel secure.

8. Ensure your pets’ access to drinking water. Make them pee or poo.

9. Do not yell or laugh at your pets when they are cowering or shaking in fear. This is a natural response to a threat that they do not understand and cannot avoid.