Message of H.E. EU Ambassador for the Launch of the EcoWaste Coalition's Lead Paint Sampling Report 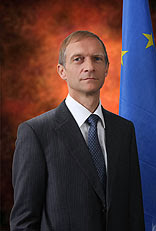 I would like to thank you for inviting the European Union this morning to attend the launch of EcoWaste Coalition’s lead paint sampling report and press conference.

This week marks the International Lead Poisoning Prevention Week.  120 million people across the world are still overexposed to lead.  The majority of them are in the developing world and children are the most severely affected.  Lead exposure in children happens through contact with lead contaminated dust and soil in their environment.  It affects brain development leading to lower IQ, mental retardation and kidney damage.  These effects have a negative impact on school performance and are non-reversible.  600,000 new cases of children with intellectual disabilities due to lead exposure occur every year according to the World Health Organization.

The report launched today is to our knowledge the first and most comprehensive piece of evidence showing that the danger of lead exposure in the Philippines exists.  Lead concentrations found in more than 60% of paint samples collected in the Philippines were worryingly high.  Concentrations measured by our contractor – a certified laboratory based in Italy – reached levels up to 200 times the level authorized in many countries.  Such paints are widely available to the public.  They affect us and they affect the most vulnerable of us, namely children, pregnant women and workers.

Lead is easy to replace in the majority of cases.  Alternative, less harmful chemicals exists.  Lead-free paints available on the market are not more expensive.

The EU has taken steps in order to phase out the use of lead in paint in its common market.  In 1989, members of the EU collectively banned the use of lead in paint after the adoption of a Council Directive which states that lead compounds “may not be used as substances and constituents of preparations intended for use as paints, except for the restoration and maintenance of works of art and historic buildings”.   This regulation was later completed by other directives banning the use of lead compounds in key consumption products, notably toys and cosmetics.

The Philippine government is aware of the issue and is taking steps to control the use of lead in decorative paints.  We are encouraged by recent Congress and Senate Resolutions supporting the Lead Poisoning Prevention Week as well as on-going discussions under the banner of the Environment Management Bureau to come up with a Chemical Control Order phasing out the use of lead in paint.  Those among manufacturers having voluntarily phased out the use of lead should also be commended.

The study launched today was funded by the European Union who provided a PHP 80 Million grant to implement the Asian Lead Paint Elimination Project in seven countries (Bangladesh, India, Indonesia, Nepal, Philippines, Sri Lanka and Thailand).  Results so far have been very encouraging with countries such as Sri Lanka having passed recently legislation banning the use of lead in paint.

The Lead Paint Elimination Project forms part of the SWITCH Programme – an EU-funded programme implemented in 16 countries across Asia.  Seventy projects are on-going with the objective to promote sustainable consumption and clean production practices.  Four SWITCH Projects with total EU funding of PHP 400 Million are implemented in the Philippines.

Reducing exposure to lead in paints is a global public health priority.  Childhood as well as occupational exposure to lead carries huge health and economic costs.  The Philippines’ objective to eliminate lead in paints and remove the risks posed by such toxic products, especially on children, women of child-bearing age and workers is laudable.  I hope today’s press conference will serve to raise awareness on this invisible threat and bring about the necessary changes to preserve our environment and protect the health of our children.
Thank you.