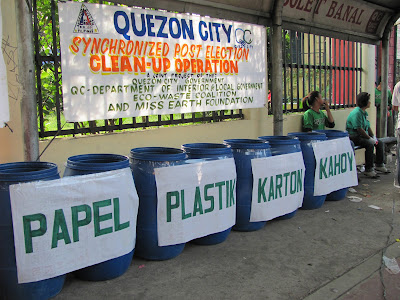 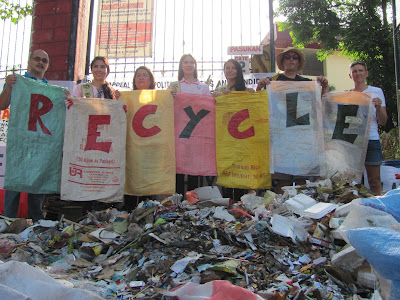 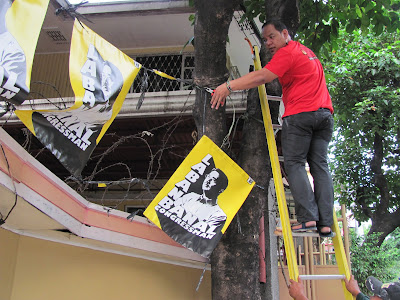 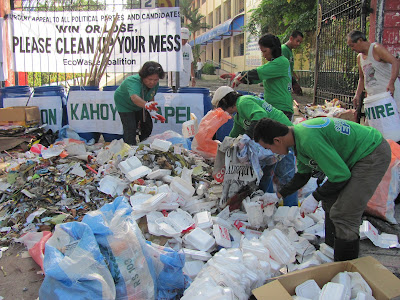 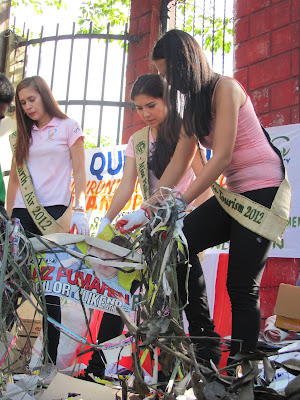 Quezon City. The country’s post-elections have always been accompanied by voluminous trash from all sorts of political discards that the candidates utilized throughout their campaign.

This year was no exemption as the EcoWaste Coalition, together with the Quezon City Government and the Miss Earth Foundation, teamed up in getting rid of political materials at the vicinity of the Quirino Elementary School located in Anonas St., Barangay Quirino 2-B, Quezon City.

Miss Philippines Earth 2012 winners were led by reigning beauty titlist Stephany Stefanowitz who joined the multi-sectoral volunteers in the ecological clean-up drive with the dual purpose of encouraging the immediate removal of campaign remnants and ensuring that the discards are properly segregated to facilitate recycling.

Miss Earth Foundation Executive Director Cathy Untalan echoed the importance of isolating and recovering campaign discards “to avoid reusable and recyclable resources like paper, plastic and wood from being repeatedly wasted through dumping or burning,” at the same time hoping for “leaders who will really prioritize environmental protection.”

“Time and again, the political ad bonanza has irrefutably defiled our streets and polluted the air, converting them into instantaneous and uncontrolled dumpsites,” Rentoy pointed out.

“The immediate removal of posters and banners after the elections is not enough. It is also important that these materials does not get burned or hauled into various disposal sites, which are already brimming with tons of garbage,” Rentoy added.

Tin Vergara, Zero Waste Campaigner of the EcoWaste Coalition reiterated their call for an eco-clean-up without resorting to dumping or burning as a solution to post-election garbage problems because of its known hazards to human and the environment.

“If we subject campaign materials to waste dumping or open-burning, these discards may be visually undetected after a typical neighborhood clean-up, but they’re actually far from gone since disposal through non-environmental means can trigger the formation of toxic leachate and noxious gases that can pollute the air, water and soil, including the food supply,” Vergara explained.

During the eco-clean-up, participants removed assorted political materials, mostly made of paper and plastic, plastered on school walls, buildings and establishments, waiting sheds, street posts and cables, after which, the materials were then sorted out, clustered and placed on used rice sacks.

The segregated paper and plastic materials were brought and sold to a junk shop for recycling.

“With this action, we hope to embolden our people to get into the post-election clean-up mode that should be accomplished with urgency and with the health and safety of our communities in mind,” Vergara added.

The EcoWaste Coalition is a national network of more than 150 public interest groups pursuing sustainable and just solutions to waste, climate change and chemical issues towards the envisioned Zero Waste 2020 goal.