EcoWaste Coalition Lauded for Its Advocacy toward Lead-Safe Paint Products 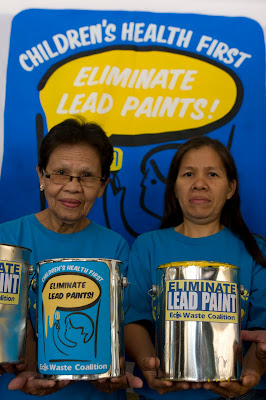 Two government agencies with key responsibilities in ensuring the protection of public health and the environment have recognized the work of a toxics watchdog to eliminate lead, a neurotoxin, in paint products.

In response, Manny Calonzo, EcoWaste Coalition’s Steering Committee member, said: “We are deeply encouraged by the support from the country's foremost pillars for health and chemical safety, which is crucial for the adoption and enforcement of a national policy to eliminate childhood exposure from lead-added paint.”

“The DOH commends your efforts to protect consumers and raise their awareness and preference for safe products. We were informed of your present advocacy for the immediate phasing out of lead in paints in the country. We are nothing but supportive of your cause,” wrote Health Secretary Enrique T. Ona.

In his letter, the health chief cited information from the US Center for Disease Control identifying lead paint as hazardous and a major cause of lead exposure among children.

“Lead is highly toxic and affects virtually every system of the body. It can damage a child’s kidneys, central nervous system and can cause anemia. Exposure at very high levels can cause, coma, convulsion and death,” Dr. Ona said.

“Even low levels of lead are harmful. Levels as low as 10 micrograms of lead per decileter of blood are associated with decreased intelligence, behaviour problems, reduced physical stature and growth, and impaired hearing,” he stated.

“Thus, clinical toxicologists have indicated that there are no safe levels for lead exposure among children. This fact makes banning of substances containing lead an imperative,” Dr. Ona said.

The DOH likewise noted the effort of the DENR-EMB to craft a Chemical Control Order (CCO) for lead and lead compounds, which the department hopes “will eventually result in the banning of lead paint at the soonest possible time.”

Atty. Cuna specifically cited the position paper submitted by the EcoWaste Colaition regarding the draft CCO that rekindled dialogue about the “prohibited uses of lead in children’s toys, decorative paints and pigments, among other concerns.”

He likewise cited the information shared by the group regarding the global paint sampling results that “highlighted the need for the regulatory body to review” the draft policy and “address the concerns on potential exposures of children and workers.”

The DENR-EMB also notified the EcoWaste Coalition about the willingness of paint manufacturers to comply with government regulations on lead in paint, but companies will require time and resources to research and shift to non-lead alternative raw materials and implement gradual phase-out plans, the agency pointed out.

A government initiated consultation held in September 2011 recommended paint industry inventory and assessment to help in drawing up a realistic and workable phase-out period for the use of lead in paint, Atty Cuna said.

In the meantime, companies engaged in paints and pigments were advised to conform with the Priority Chemicals List Compliance Certificates under DAO 2007-23, he stated.

Well with your permission allow me to grab your rss feed to keep up to date with forthcoming post. Thanks a million and please keep up the effective work.