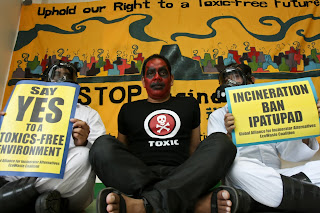 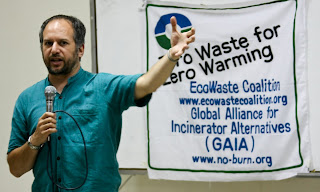 Quezon City. Investments in the waste sector should not go towards costly high-tech end-of-pipe technologies but towards Zero Waste that will dramatically reduce the amount of trash sent for disposal.
US-based Neil Tangri, a waste and climate campaigner of the Global Alliance for Incinerator Alternatives (GAIA), pointed this out today before a gathering of over 50 waste activists in Quezon City that GAIA co-organized with the EcoWaste Coalition.
“Investments in waste reduction, source separation, extended producer responsibility, informal recycling sector and other initiatives will lead to a progressive reduction on the volume and toxicity of waste sent for disposal,” he said.
“By now, there is general agreement around the world on the best way to manage municipal waste. This is codified in the waste hierarchy and the mantra “reduce, reuse, recycle” indicating a preferential order for handling waste: source reduction is the highest priority, followed by finding the “highest and best use” for each discard,” Tangri said.
He drew attention to the important role that the informal recycling sector plays in developing countries like the Philippines.
“Wastepickers are the de facto recycling system in much of the world; if not for their work, the waste problem would be much worse than it already is. But they can do much more if they are given investment, opportunities, and above all, respect,” he said.
To lower the amount of waste going to dumps, reduce greenhouse gas and toxic air emissions and provide additional employment, local authorities should seek cooperative arrangements with wastepickers to implement source separation and treatment of organics, Tangri suggested.
He explained that the apparent fixation on disposal technologies are “in part, because these are the most profitable aspects of waste management, and in part, because so many open dumps and garbage mountains persist around the world, with their attendant health and environmental hazards.”
“Almost anything appears to be an improvement over open dumps and open burning, but we should not fall prey to ‘second worst’ technologies, of which there are many: engineered landfills with gas collection, incinerators, refuse-derived fuel and staged incinerators are all expensive technologies which fail to solve the garbage problem,” he said.
Echoing what local activists have been saying, Tangri argued that end-of-pipe disposal technologies undermine resources for Zero Waste while creating new problems such as toxic emissions, hazardous solid waste, increased greenhouse gas production, and reduced employment in recycling.
“Even as engineered landfills attempt to capture methane – a powerful greenhouse gas – they are managed in such a way to increase methane production, much of which escapes to the atmosphere despite the engineers’ best efforts,” Tangri said. “Landfills also produce large quantities of toxic leachate which contaminates ground and surface waters.”
During the forum, waste and climate activists rejected mass burn incinerators as major sources of toxic air emissions and solid hazardous waste in the form of incinerator ash.
Also, by destroying resources, these incinerators increase the demand for virgin wood, plastic, paper and other materials and causing rising environmental destruction in raw material extraction.
Contrary to their billing, incinerators are also major sources of greenhouse gases, the activists said.
Tangri also rebuffed refuse derived fuel (RDF) and other “incinerators in disguise.”

“Refuse derived fuel, whether burned in a purpose-built incinerator or a cement kiln, is nothing more than dried mixed waste, with all the attendant dangers of waste incinerators,” he said.
“Staged incineration processes such as plasma, pyrolysis and gasification, use large quantities of energy to break the waste down into a gas before burning it. They are an immature technology, prone to leaks, high emissions releases, and even explosions. And they generally end up using more energy to break the waste down than they can recover from burning it,” he added.
Republic Act 8749 or the Clean Air Act prohibits the “burning of municipal, bio-medical and hazardous wastes, which process emits toxic and poisonous fumes.”
A related law, Republic Act 9003 or the Ecological Solid Waste Management Act, reinforces the prohibition against waste burning with the “adoption of best environmental practices in ecological solid waste management excluding incineration.”
-end-
Posted by Rei Panaligan at Wednesday, September 15, 2010

Somehow, certain innovations have been made to resolve this situation just like the revolutionary conversion of plastic pyrolysis oil.