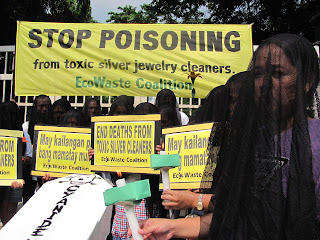 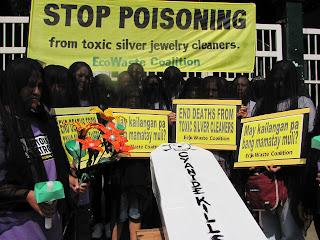 The EcoWaste Coalition, an advocate for public health and chemical safety, today staged a mock wake at the gate of the Department of Environment and Natural Resources (DENR) in Quezon City to show their sorrow and indignation over the poor enforcement of the agency’s ban on cyanide-laced silver cleaning agents.

Dubbed as “Kaluksa” (Kalampag-Luksa), the mourners brought with them an improvised white coffin made from recycled boxes that bears the words “cyanide kills,” complete with the toxic insignia of skull and crossbones. Cyanide, a highly toxic chemical, is poisonous to humans and aquatic life even at low concentrations. Aside from cyanide, silver cleaning agents can also contain ammonia, isopropanol, nitric acid, sulfuric acid and thiourea, a suspected human carcinogen.

Wearing black veils that enhanced the somber mood, the mourners stood in silence before the coffin that symbolizes the lives lost because of accidental or intentional ingestion of over-the-counter silver cleaning solutions. They lighted candles and offered prayers for the victims and their bereaved families.

“We have come here to grieve over preventable cyanide poisoning and to appeal to Secretary Paje to fully enforce the DENR’s own policy banning cyanide-containing silver cleaners for the sake of our people’s health and safety,” said Dr. Leah Primitiva Samaco-Paquiz, Secretary, EcoWaste Coalition.

Caloocan Bishop Deogracias S. Iñiguez, who also heads the Public Affairs Commission of the Catholic Bishops’ Conference of the Philippines, echoed the plea made by the EcoWaste Coalition.

“These senseless deaths from the ingestion of toxic chemicals in silver cleaners have to end. Let us honor and sanctify life by taking out of the market toxic products that can harm, maim or kill, especially the children. Let not harmful substances ruin our children’s hope and right to live,” stated Bishop Iñiguez.

The event was held two days after the deadly mixture claimed the life of Trizha M. Manlapig, a one-year old girl from Paco, Manila, who drank a silver cleaner by mistake and was declared dead on arrival at the Ospital ng Maynila.

Despite a supposed DENR ban on cyanide-laced silver jewelry cleaning solutions, cases of intentional or non-intentional poisoning have continued to pile up, lamented the EcoWaste Coalition.

Data provided to the EcoWaste Coalition by the National Poison Management and Control Center (NPMCC) show that the Philippine General Hospital-based institution saw, from January to March 2010, 49 cases (24 of which were pediatric) of silver cleaner poisoning out of 270 total in patient admissions. Out of 49 cases, two male patients aged 29 and 50 died due to non-accidental intake of silver cleaners.

Based on the NPMCC’s 2009 Annual Census, the Center handled a total of 235 cases for cyanide-containing silver cleaners for both in patient admissions and telephone referrals. The same report shows that silver cleaner poisoning ranked number two in the adult age group with 191 cases and number six in pediatric age group with 44 cases.

To stop the senseless deaths, the EcoWaste Coalition called on the DENR to initiate sustained law enforcement action in cooperation with the National Bureau of Investigation, Philippine National Police and the local government units to stop the illegal distribution and sale of cyanide-laced silver cleaners.

The Environmental Management Bureau (EMB) in 2009 tested some samples of silver cleaners for cyanide. Test results confirmed “high content of cyanide, which is fatal to humans when ingested,” according to the EMB letter to the EcoWaste Coalition.

The EMB likewise told the EcoWaste Coalition that “the risk that these jewelry cleaners containing cyanide pose to public health is extremely high, as evident in the reported casualties, thus, its ban will be strictly enforced.”

Notwithstanding the EMB promise of confiscating cyanide-containing silver cleaners, subsequent market surveillance by the EcoWaste Coalition proved that the toxic products are still rampantly sold in jewelry shops devoid of proper labeling and precaution.

Instead of toxic cleaning agents, the EcoWaste Coalition suggests the use of toothpaste, baking soda, liquid dish soap and mild detergents as safer substitutes for polishing silver jewelry.