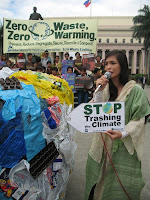 Groups united within the Global Alliance for Incinerator Alternatives (GAIA), including the EcoWaste Coalition of the Philippines, urged governments to adopt Zero Waste as an essential strategy to spur dramatic reduction in GHG from landfills and incinerators.

As part of the yearly Global Day of Action against Waste and Incineration, some 165 groups from 39 countries seeking environmental, climate and economic justice wrote to their government negotiators asking them to incorporate Zero Waste into their deliberations and plans at the Poznan climate talks.

In Manila, actress Chin-Chin Gutierrez, Ret. Col. Carlos Baltazar (representing Mayor Alfredo Lim) and members of GAIA and the EcoWaste Coalition assembled at the Liwasang Bonifacio and undraped a giant globe made of trash to urge the nation to put a stop to the wasting cycle that is warming the fragile planet.

Organizers chose the historic location for the event to mark the 145th birth anniversary of revolutionary hero Andres Bonifacio and to emphasize the heroic role that all caring citizens can play to defend humans and other life forms from the ill effects of the waste and climate crisis.

“We join the global push for ‘Zero Waste for Zero Warming’ to shift from costly and GHG-producing waste disposal to a climate friendly program that will also stimulate green investment, infrastructure and livelihood to benefit the economy and society,” stated Rei Panaligan of the EcoWaste Coalition.

For her part, Gigie Cruz of GAIA said: “We urge the Philippine delegation to Poznan, led by presidential adviser Heherson Alvarez, to speak to the delegates about the many-sided advantages of embracing Zero Waste, the cheapest and fastest strategy that the global community can act upon to reduce GHG emissions.”

To drive her point, Cruz cited US figures showing that each household that recycles easy-to-recycle items is equal to one car off the road; that doubling the recycling rates will mean 25% of homes off the electric grid; and that an incremental approach to Zero Waste is equivalent to shutting 21% of coal-fired power plants.

Zero Waste, the groups explained, aims to reduce to zero the volume and toxicity of materials being disposed to landfills and incinerators by creating a closed-loop economy where all discards are reused, repaired, recycled or composted and implementing clean production, extended producer responsibility and other policies to redesign goods that cannot be safely reused, recycled or composted.

Zero Waste, they added, will put a lid to the wasting and warming cycle that requires new resources to be pulled out of the earth, processed in factories, shipped around the world, and burned or buried in our communities – a process that leaves a trail of GHGs and other toxic health and environmental pollutants.

In a statement of concern on waste and climate change, GAIA, in addition to urging governments to adopt Zero Waste, also recommended that mitigation funds to be used in the waste sector should support Zero Waste projects.

According to GAIA, incinerators, landfills, and other "waste-to-energy" projects which undermine Zero Waste should be ineligible for mitigation funds, offset credits and other forms of climate-related financing and subsidies.

The full text of said GAIA statement can be downloaded at: http://no-burn.org/cc