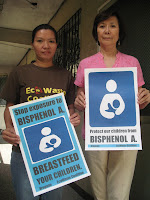 Quezon City. Advocates for children’s health and chemical safety have combined their voices in urging swift precautionary action against the continued use of bisphenol A (BPA) in infant and other consumer products.
Arugaan, a staunch advocate of breastfeeding and children’s health, and the EcoWaste Coalition, a keen campaigner against hazardous chemicals, jointly called on the authorities to act with urgency to safeguard public health from exposure to BPA.

The public interest groups urged the Department of Health to issue without delay a health advisory that will inform consumers about the hazards of BPA to human health, especially for developing fetuses and newborns.

After the melamine-tainted milk crisis that shook the world, new studies have rekindled concern on BPA, a synthetic chemical compound that is widely used in the manufacture of polycarbonate plastics and epoxy resins for lining metal cans.

“The leaching of BPA, an endocrine disruptor, from polycarbonate feeding bottles can result to serious developmental and reproductive disorders,” warned Ines Fernandez of Arugaan, adding that “such a toxic threat to babies provides another compelling reason why mothers should breastfeed and shun artificial breastmilk substitutes.”

The EcoWaste Coalition, which has recently launched a campaign on hazardous chemicals, believed that the new studies should oblige policy makers into adopting a precautionary ban on BPA-contaminated products.

“Let us heed the early warnings from the numerous studies on the toxic health effects of BPA, particularly to fetuses, babies and children who are most vulnerable to injuries from hazardous chemicals. It is our collective responsibility to take precaution now by banning BPA and promoting ecological alternatives to eliminate harm,” said Sonia Mendoza of the Mother Earth Foundation, a member of the EcoWaste Coalition.

The Journal Sentinel published in Milwaukee, Wisconsin released last November 20 a report from a study it commissioned which shows that “microwave-safe” meals and containers, including plastic baby feeding bottles, baby formula and baby food, leached toxic doses of BPA when heated. The report is available at:
http://www.jsonline.com/watchdog/watchdogreports/34532034.html

The said study has been reported as spurring state and federal lawmakers in US into calling for the eradication of BPA from food and beverage containers.

Also last week, the American Society for Reproductive Medicine reported three new studies linking BPA exposure to impaired fertility in both women and men, qualifying that the findings need to be further examined.

These studies, the EcoWaste Coalition pointed out, should inform the process being facilitated by the Department of Trade and Industry towards the identification and phase-out of non-environmentally acceptable products and packaging materials as required by Republic Act 9003 or the Ecological Solid Waste Management Act of 2000.

In the absence of a BPA ban in the Philippines, the groups recommend the following consumer tips to prevent or reduce exposure to this toxic chemical:

2. Refrain from using polycarbonate plastic containers; use safer alternatives such as glass, ceramics or stainless steel.

4. Reduce consumption of canned foods as can liners may contain BPA; opt for natural food or food stored in safer containers.

5. Check the product labels and select the ones that say “BPA-Free”

“Pursuant to the goals of the Strategic Approach on International Chemicals Management (SAICM), we urge the government to act decisively and protect the most vulnerable members of our society from BPA contamination,” the groups said.

SAICM refers to the international policy framework that governments, including the Philippines, adopted in Dubai in 2006 to ensure that chemicals are used and produced in ways that no longer pose significant harm to public health and the environment.

"What will happen to the next generation if babies now become infertile because of the adverse effects of the hazardous chemical BPA found in plastic bottles and tin cans? Who will continue the Filipino society?” the groups reminded the authorities.
EcoWaste Coalition
Unit 320, Eagle Court Condominium, Matalino St.
Quezon City, Philippines
+63 2 9290376
ecowastecoalition@yahoo.com
Posted by Rei Panaligan at Tuesday, November 25, 2008