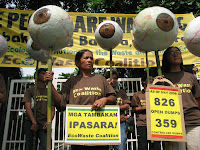 "The people are watching."

Caring paper-mache eyeballs and a huge banner that says “the people are watching, tambakan ng basura, ipasara!,” members of the EcoWaste Coalition lined up outside the Department of Environment and Natural Resources (DENR) to push for the closure, clean up and rehabilitation of all garbage dumps throughout the country.


The activists wielded giant eyeballs to signify the people’s intent to keep an eye on the long overdue closure of the country’s dumps, which should have been shut down in 2004, and to push for ecological solutions to the waste and climate crisis.

“We have come here armed with eyeballs to let Secretary Atienza know that we are watching closely how the DENR and National Solid Waste Management Commission (NSWMC) will enforce the six-month ultimatum he gave for local authorities to shut down their illegal dumps,” Romy Hidalgo, Secretary of the EcoWaste Coalition, said.

“There is no question about it. All dumpsites produce leachates and emissions that poison our soil, water and air. They are all major sources of greenhouse gases that cause climate change. We are taking government to task for not acting quickly enough in favor of public health and the environment,” Beau Baconguis, Toxics Campaigner of Greenpeace Southeast Asia, stated.

“We will vigilantly monitor the action, or inaction, of the DENR, NSWMC and other concerned entities to ensure not only the closure of the dumps, but their clean up and rehabilitation as well for the good of the people and the environment,” the EcoWaste Coalition stated.

The EcoWaste Coalition recalled with much disappointment that in 2005-2006, under the watch of then Secretaries Michael Defensor and Angelo Reyes, the DENR issued some 780 Cease and Desist Orders (CDOs) to LGUs operating illegal dumps that were largely ignored. 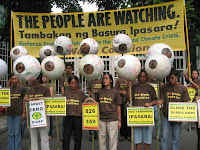 The waste and pollution watchdog insisted for full public disclosure of all steps that will be undertaken by the DENR and the NSWMC to hasten the closure of all dumps even before the ultimatum set by Sec. Atienza’s on 5 November 2008, including posting on the DENR’s website all notices served against non-compliant LGUs and other relevant efforts to assist LGUs to switch to ecological solid waste management.

The latest published information from the DENR shows that as of May 2008 some 826 open dumps and 359 controlled dumps continue to operate in brazen violation of the law.

The above figures do not include the so-called “guerilla dumps” often seen in street corners, vacant lots and waterways.

While seeking the closure, clean up and rehabilitation of all dumps, the EcoWaste Coalition appealed for multi-sectoral cooperation that will prevent and reduce waste, and mainstream local and low cost community-based solutions such as the establishment of barangay-based ecology centers or materials recovery facilities (MRFs). The group further called for action that will address the need of informal recyclers, particularly, the waste pickers for humane, safe and secure livelihood.