Government Urged to Step Up Drive vs. Inhalant Abuse (Watchdog Pushes Ban on Sale to Children of Rugby, "Vulca Seal" and Allied Products) 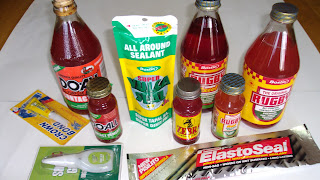 As the World Health Day is observed today, April 7, a toxics watchdog pressed the government to launch a vigorous campaign against inhalant abuse amid reports of out-of-school youth addiction to adhesives, glues, sealants and other aromatic solvents.

The EcoWaste Coalition made a clarion call to national government agencies (NGAs) and local government units (LGUs) for heightened action that will, in particular, ban the over-the-counter sale to children of rugby contact cement, “Vulca Seal”and related items that are often sourced from hardware stores.

Rugby, “Vulca Seal” and other allied products contain health-damaging volatile organic compounds that are emitted as gases or vapors, which are not intended to be inhaled as glue sniffers in the streets of Metro Manila do, the EcoWaste Coalition pointed out.


“We appeal to concerned NGAs, LGUs, civic, faith and business groups to put their heads together to, once and for all, eliminate this chemical addiction affecting boys and girls and even adults living on the streets. It’s time to put the nail in the coffin on inhalant abuse that can lead to serious health consequences,” said Thony Dizon, Coordinator of EcoWaste Coalition’s Project Protect.


According to a brochure published by the Dangerous Drugs Board (DDB), “inhalant abuse is the deliberate inhalation of volatile chemical substances that contain psycho-active vapors to produce a state of intoxication.”

A strategy meeting to combat inhalant abuse should devise a holistic plan that will strictly restrict the sale of adhesives, glues, sealants and related products to qualified users and never to kids, and provide systematic psycho-social interventions, including counselling services as well as educational, skills-building and value formation opportunities to solvent addicts, the EcoWaste Coalition pointed out.

In the meantime, the EcoWaste Coalition reminded adhesive and glue manufacturers to strictly follow the DDB Board Regulation No. 2, Series of 2009 classifying toluene-based contact cement without at least 5% mustard oil content as dangerous drug.

“Better still, we urge manufacturers to make toluene-free adhesives that will be safer to use and less deleterious if misused,” Dizon.

A market surveillance conducted by the EcoWaste Coalition on April 5 and 6, 2013 showed that there are brands of all-purpose contact cement in 45 ml. and 300 ml. bottles such as “Bostik Rugby Excel” and “Shelby Do All” that contain no toluene, while “Zebra” has “sniffing deterrent of 5% mustard oil.”

The EcoWaste Coalition is a national network of more than 150 public interest groups pursuing sustainable and just solutions to waste, climate change and chemical issues towards the envisioned Zero Waste 2020 goal.